What is cherry picking? Cherry picking is to choose a commit from one branch and apply it to another. The command used is git cherry–pick , and here we actually use forward- or back-port commits from a maintenance branch to a development branch.cherry-pickcommand in git allows us to copy only one commit at a time.

Cherry-pick uses continue, quit and abort subcommands in git.The continue command is used for continuing the operation in progress using .git/sequencer information.It can be also used to continue operations after resolving conflicts in a failed cherry-pick.The quit command forget about the current operation in progress and can be used to clear the sequencer state after a failed cherry-pick.And finally, the abort command cancels the operation and return to the pre-sequence state.

Where can cherry-picking be applied?

Whenever defect occurs in the production, fixation must be performed. Once the defect is fixed, you’ll want to bring this code change back to the development branch so the defect won’t be re-introduced into production with a future update.The first option is to consider whether a simple git merge would work. If a merge is possible, that would be the ideal solution. However, if there are other changes made on the production branch, shouldn’t be brought back to the development branch, a merge would not produce the desired result since it will include all the changes made to the production branch. Example: Figure 1: Problem is found in the Production branch. A fix for the problem is developed in commit H, but commit G does not need to be applied to the Development branch. 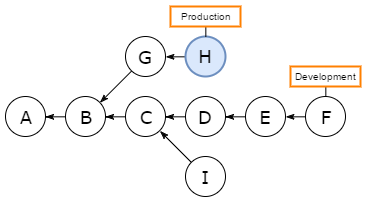 What git cherry-pick does? It takes a commit from somewhere else, and “play it back” wherever you are right now.It can be explained by an example given below:

Consider you were at node H in this graph, and you typed, git cherry-pick Eyou’d wind up with a copy of commit E—let’s call it “E prime” or E’—that pointed to H as its parent, and can be represented as,

fig:b
And if you typed,git cherry-pick C D E then the graph can be as,

From this graph, we can infer that git has copied changes made in one place, and replayed them somewhere else.
If H is in the production and we are taking the difference  from B to C and apply to H, the C prime (C’) can be obtained to H, same way after cherry-picking  D and E obtains  D’ and E’, and this can be diagrammatically represented as in the Figure: 5
]]>
Previous Post Stitching it all together: Rails, PostgreSQL, Webpack, Gitlab-CI, Docker
Next Post Building a Multitenant application with Apartment gem

What is Test Driven Development?